Stay Connected
A Taste of Jazz:
An Afternoon at the Geneva Public Library 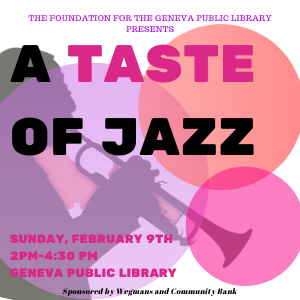 A Taste of Jazz is the Foundation for Geneva Public Library's annual signature event, sponsored by Wegmans and Community Bank. 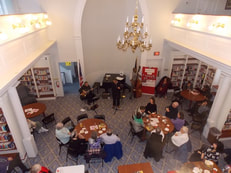 In addition to their work with the ensemble, each of the artists joining Russo leads successful and active bands of their own. Stephen Brown is Professor Emeritus from Ithaca College and the creator of its Jazz Studies Degree Curriculum. According to Russo, Woody Peters is "One of the most distinguished Ithaca College Music School alumni" and was a close friend and roommate of Geneva’s own Scott LaFaro. A native of Algeria, ALOJA is a PhD. professor of African American Studies at Cornell University. Working in support of public libraries is natural to ALOJA, who served as head of the Tomkins County Public Library Foundation for several years.

Russo has experienced a varied musical career, including early years teaching all levels from grade school to college, to performing, composing, and recording in the competitive cultural mecca of Ithaca. Russo grew up in Geneva and studied music at the University of Rochester’s Eastman School of Music. His band appeared at Carnegie Hall’s Isaac Stern Auditorium in 2003 and has performed at Geneva on the Lake and at Taughannock Falls State Park for many years. Last year, the East Hill Classic Jazz Band was selected to lead a New Orleans style funeral procession for her burial ceremony of African American Civil Rights icon Dorothy Cotton.
Previous Event Sponsors